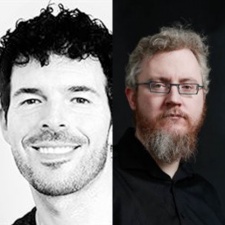 Two of the top developers at EA's BioWare studio have announced their departure from the developer.

In a post on the company's website, general manager Casey Hudson (pictured, right) said that he was leaving, while executive producer Mark Darrah (pictured, far right) is retiring.

Hudson joined BioWare back in 1998 and has worked on the likes of Star Wars: Knights of the Old Republic and Mass Effect. He left the studio in 2014, working at Microsoft for three years, before returning in as GM in 2017. Senior director of development operations Gary McKay will be taking on the role of interim general manager.

Darrah, meanwhile, was hired to BioWare in 1997 as lead programmer for Baldur's Gate. From there he was promoted to stream architect, before becoming project director in 2007.

"There are so many people I want to thank for sharing in this journey: Our players, who inspire us and make it all possible," Hudson wrote.

"Electronic Arts, which has given us a stable and supportive environment to keep making games even in the most unstable times. And the many amazing people that I’ve had the honour of working with and learning from over the years.

"Perhaps most of all I want to thank BioWare’s founders, Greg Zeschuk and Ray Muzyka, for hiring me back in 1998 as a junior technical artist. They took a chance on me and fundamentally altered the course of my life in the most amazing way. Because of their wisdom and foundational values, BioWare has always been a company built on humility, integrity, and the idea of finding great people and fully empowering them. We’ve been fortunate to have found success, and I know those enduring values will continue to guide BioWare’s success in the future."

These departures come in the wake of BioWare's troubled online sci-fi title Anthem. This launched in 2019 after what sounds like a rushed development with a load of issues. The studio has confirmed that it is trying to rework the game.

Hudson and Darrah are also the latest high-profile developers to leave BioWare following in the footsteps of lead producers Ben Irving and Fernando Melo, as well as live services producer Chad Robertson.

The studio is also developing a new entry in one of its "most prestigious franchises."