Your Favourite Games of 2017: LPVG's Joe Parlock explains why Opus Magnum is his choice for this year 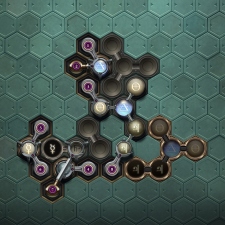 Joe Parlock is a UK-based games writer, with a focus on PC games, hardware, and how disability and gaming interact.

Having been playing games since before he can remember, his favourites include Sonic the Hedgehog, Mirror’s Edge, Left 4 Dead and Assassin’s Creed. On top of his work as co-founder of LetsPlayVideoGames.com, he has also written for Polygon, The Telegraph and Destructoid.

The first I saw of Zachatronics’ Opus Magnum was a gif on Twitter. It was a terrifying mash of levers and pulleys, shifting coloured orbs around in ways that were too fast and complex for me to even begin to understand, but the convolution of it all was part of the appeal. The perfectly looped dances of machinery were hypnotically satisfying to watch, and I knew straight away I wanted to be able to create my own.

Puzzle games have not grabbed me since Portal 2 in 2011. Staring at a screen waiting for an epiphany that might never come is rarely appealing, and all too often a game’s failure to communicate its own rules drives me to distraction. Opus Magnum’s open-ended problem solving, and focus on iterating and reiterating your solutions, makes it brain-teasing and disarmingly accessible in equal measure, and one of my biggest surprises of 2017.

Opus Magnum places you in the fancy coat of a talented young Alchemist, newly employed by one of the great Houses that rule the land. By programming the mechanical components of alchemical engines, you’re able to automate the pushing, pulling and bonding of elements and metals to create larger, more useful compounds. While it begins with mundane projects, such as distilling alcohol, the political upheaval of the warring houses quickly calls for much more unstable, and complicated, materials that, in any other setting, would be magical in nature.

The mesmerising display of a well put-together machine isn’t the only driving force, as each solution is measured against every other player’s on a series of histogram for speed, component cost, and how much of the board is used up. Spending hours carefully programming your ideal solution, only to find there is an obvious, better way you’ve missed works as a fantastic motivator.

In a lot of ways, Opus Magnum’s alchemical engine is reminiscent of Minecraft’s Redstone. The logic is strict, but the execution is simple enough to allow for endless creativity among those who put the time in to understand its quirks. Players are then encouraged to share their machinations with the world, and, thanks to that, a community has quickly formed around the game on Steam and Reddit dedicated to pushing each other towards alchemical brilliance.

These player-made challenges range from full puzzles shared through the Steam Workshop – such as transforming a simplified DNA compound into a League of Legends’ player’s DNA, which is nothing but salt – and unofficial challenges through the Steam forums, including making machines that are perfectly symmetrical, or ones that pride themselves on lengthy inefficiency as a rebellion against the core goals of the game. I’ve quite often found myself spending my downtime from Opus Magnum reading about and watching it instead.

This is systems-driven gaming at its absolute best. The rules are simple, but the ways you need to work with them are infinitely complex. It’s relaxing to watch an optimised machine, but getting there requires plenty of sleepless nights playing out the troublesome sequences in your head. Of course there are areas where it could do better - calling the interface ‘fiddly’ would be the understatement of the century - but that hasn’t stopped me from whiling away the hours hunched over Opus Magnum’s alchemical engine.

PCGamesInsider.biz Games of 2017 - The titles that defined the last year in the PC games market