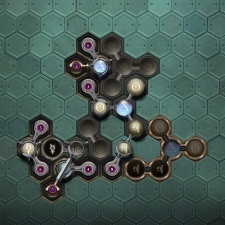 The developer of acclaimed puzzle title Opus Magnum has said that the project has been rejected from digital storefront GOG.com.

Taking to Twitter (below), Zachtronics released the retailer's public statement on the matter, saying that the game did not pass its internal curation system. What this actually means is unclear, with GOG saying they rarely share details about this process.

"Opus Magnum did not pass our internal curation system," the statement read.

"We rarely ever want to share any details on the actual system and how it looks and what it means because it's just too individual. We take into consideration many other factors than just the actual game itself."

We've reached out to GOG for some kind of clarification. Shortly after release, the Zachtronics Twitter account was asking where people would want to buy the game if not on GOG - the developer suspected that Opus Magnum might get rejected due to looking "too much like a mobile game".

This information has caused something of a backlash on social media, but it's worth noting that GOG.com places a heavy emphasis on curation on its platform. Compare this news story to some of the pieces about Valve's battle with managing games on its platform, and it's clear that GOG.com is on the right tracks. As a result of the company taking an active look at the content on its storefront, there are going to be some errors.

I've had a bunch of people ask me if Opus Magnum will ever be available on GOG. Here is the response I got from them when I asked for a reason I could share publicly for why they didn't want to carry it. We would still like to be on GOG if they change their mind! pic.twitter.com/Nwb7JzLVI1

The project, released out of Early Access December 7th and has become something of a cult hit. Anyone on Twitter in the games space will certainly have seen a number of gifs where users share their solutions to problems.

LPVG's own Joe Parlock picked the title as his game of 2017 - you can read why here.