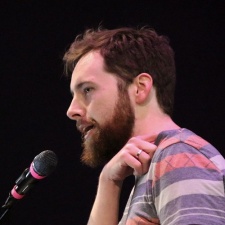 A dreamlike geocities adventure seems like a rough sell for audiences, but Jay Tholen proved that notion wrong when his fake-OS raised $35,000 on Kickstarter in 2016.

Hypnospace Outlaw is a geocities-inspired fake internet dreamscape, with an investigation adventure game buried within.

It’s a far cry from Tholen’s last game, the Devolver-published Dropsy, and it’s no accident that Hypnospace takes a far more freeform structure than the point-and-click clown.

“My big post-Dropsy takeaway had to do with streamers/let's play folk and how their coverage may have not helped us gain so many players,” says Tholen. “It's a point and click adventure in which every action involves clicking and waiting. There's no reason to give it a go if you've just watched the whole thing on youtube.”

“We've done a lot of thinking and planning around features that could present well to streaming audiences, but possibly make them wonder if there's something the streamer missed beyond the visible boundaries. Maybe a weird webpage or downloadable app they missed could still be floating around somewhere? The simulated operating system is great for this, it really makes the OS itself feel like your avatar. “

“We've also made polished and accessible dev tools, so players will be able to make their own pages or music sequences if they'd like.”

Kickstarter has always been a go-to option for Tholen. He believes that crowdfunding platforms are vital for more niche, experimental titles that may have a tougher time acquiring development funds.

“It's kind of all I've known. The Dropsy Kickstarter in 2013 allowed me to break away from an almost decade long stretch telemarketing-y jobs, without it I wouldn't even be doing this.”

“I think crowdfunding is probably the best hope for niche titles as long as the person seeking the funding knows how to effectively reach that niche via social media. People who back Kickstarter projects just want the thing they're backing to have a shot at existing.”

Despite that, Hypnospace Outlaw was eventually able to find publishing support. Surreal 90s internet simulators might be an unusual sell, but Tholen was able to find common ground with No More Robots founder Mike Rose. The independent publishing outfit appeared to be a perfect match for Tholen’s vision.

“I took Hypnospace around to different publishers at Gamescom last year and had a chat with many of them. Mike seemed excited about the same bits I was excited about, and didn't mind that this will likely never come to console or see localization (the fool!) so here we are.

“It's been pretty nice working with him and Simon. Having someone else there to wear a few of these hats has been a load off and it's nice to be able to focus only on the game itself.”

It’s not just like-minded publishers pitching in. The indie games space is full of loose friendships turning to formal collaboration. Hypnospace is no exception, as Tholen explained how the team behind the game came together.

“It happens organically. I meet people through forums or DMs, chat rooms, wherever and if we enjoy one another's stuff we work together. I met Mike Lasch, the programmer for Hypnospace, through the Klik/Clickteam community and he has been an absolute joy to work with. I've known Xalavier Nelson Jr (narrative designer and contributing writer) for what seems like forever.”

“I think most challenges stem from my haphazard make-it-up-as-you-go approach to making games. At this point in Hypnospace we've nailed down most features, so I can't torture the team anymore.”

Almost two years after a successful Kickstarter campaign, Hypnospace Outlaw launched into open beta at the end of June. The game is currently slated for a release later this year.

“It's been a relief. I was in a dark valley that's probably familiar to many game developers. You doubt if your game is good or fun or if anyone will actually care about it. Thankfully, the testers are enjoying it”

“[After launch], other than taking a nice break, I'd really like to get Dropsy out for Switch and restore some of the cut content that we weren't able to include in the original release. We'll see!”