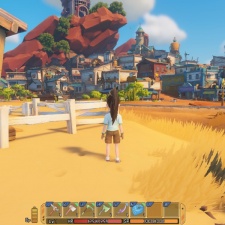 My Time at Sandrock, the upcoming sequel to My Time at Portia, has already been placed on 100,000 different Steam wishlists, according to a press released from developer Pathea Games.

It's only taken two months to hit that milestone, driven by a program of rewards. The more players add the game to their wishlist, the bigger the rewards by the time the game releases. The 100k reward involves adding facial make-up into the game. There are tiers all the way up to 250k wishlist additions.

The game is set to launch in Steam Early Access in Spring 2021, with a full release across multiple platforms coming a year later in March 2022. It's set in a charming post-apocalyptic world where humans have got their act together and built a much nicer society.

My Time at Sandrock was funded through a Kickstarter campaign that hit its $100k goal in 19 hours and wrapped up with a total of more than half a million dollars.

Pathea Games was founded in 2012 in Chongqing, China, and believes that community input is an essential part of the future of interactive entertainment.