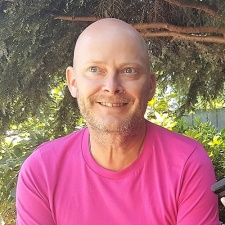 Of all the many indie publishers that have popped up in the last decade, arguably the hardest to ignore has been Devolver Digital.

Infamous for its loud and brash marketing, stable of quirky and interesting games and, er, fictional chief financial officer Fork Parker, the label turns ten this year. While from the outside looking in it would appear that Devolver has had an easy run, this isn't really the case. Prior to the indie publisher's birth in 2009, many of its founders had been involved in similar projects, with Mike Wilson, Harry Miller and Rick Stults had previously co-founded both Gathering of Developers (GOD) and, um, Gamecock Media in 1998 and 2007 respectively. The sentiment was always the same; to treat developers as the artists they are and letting them get on with making the game while the publisher handles all the boring stuff.

Within three years of being established, GOD and Gamecock were both acquired by other companies and subsequently shut down. But Devolver has lasted far longer than those ventures, with co-founder Graeme Struthers saying that the shift to digital let the firm succeed.

"We've always been PC-first but the truth of it was that being a small company, if a game is going to cost $1m to make, in the world of retail, cost of goods, manufacturing, production, warehousing, salespeople, you'd have to spend another $1.5m in those days to then ship it into retail," he tells PCGamesInsider.biz.

"And even if your game does well, you're still going to be waiting another three, four, five months to get that money back from retail. The $1m game ends up costing $3m and you have to then wait six months before you get any of your money back. Cashflow is just horrible. With digital, you get paid every month. Once a game was live, every 30 days, Valve would send you money. That changes everything.

"We stopped being accountants and worrying about cash flow. What we do well is pick games we know, we understand and are focused on doing what we should do rather than trying to run a business. In a way, digital allowed us to not run a business and just be ourselves."

Right at the start, Croatia's Croteam came on-board with Devolver, releasing HD remakes of its first two Serious Sam games in 2009 and 2010. Struthers said that this relationship gave the label something to get started with. But it was 2012's Hotline Miami that put Devolver Digital on the map.

It was indie studio Vlambeer that put Devolver in touch with game's creator Dennaton, founded by Jonatan Söderström and Dennis Wedin, both of whom were on the dole in Gothenburg on the dole. This was the publisher's first encounter with the real grassroots indie scene, which was something of a change compared to what it was used to.

"Jonatan and Dennis needed the rent for their apartment and a new laptop - something like $20,000 [to finish the game]," Struthers says.

"It was easy for us to say yes but then we couldn't really pay them because they didn't have bank accounts. We were sending money to them via Paypal for a while. Then the day the game came out, we got on a Skype call and obviously at that point no-one knows what's going to happen next, but we asked them what they were doing to celebrate and they were like: 'We don't have any money to go out' so we ended up sending across some more money via Paypal and were like: 'Please go out and do something'. That might sound unusual but at the time that felt very normal because the whole scene was very much bolted together."

Success for us is developers becoming self-sustained. They don't need us anymore. If they wanted to do things on their own, they probably could. Financially they certainly could.

Hotline Miami was the first of many projects that Struthers says is a high - pointing to others including Genital Jousting, and BroForce - both from South Africa's Free Lives - and Dodge Roll's Enter the Gungeon, too. Another high point is the E3 press conferences that Devolver has been running since 2017.

"We genuinely did not think anyone would watch," Struthers laughs.

"When we talked about doing it, we were working a lot with Twitch and it was trying to do stuff around E3. There was this an invitation for us to come up with some content and do something. Out of that came Nigel's idea to do our own E3 press conference and not announce any games. Seeing the reaction to that was great."

The event is hosted by actor Mahria Zook, playing fictional chief synergy officer Nina Struthers. That's actually the name of Graeme Struther's daughter - while which resulted in some people trying to add her on Facebook.

"Yes, there was some weirdness there, but she's leaning into it now," Struthers says.

"She likes the idea that she could basically go out, steal a car, drive it through a supermarket and wouldn't even pop up on Google. She's undercover now."

Asked how - or by what metric - Devolver measures its success, Struthers says that seeing its development partners be financially stable is the biggest one.

"If the people we are working with are successful then it means we are being successful. We're sharing in that success financially," he says.

"Success for us is those developers becoming self-sustained. They don't need us anymore. If they wanted to do things on their own, they probably could; financially they certainly could. Seeing these companies mushroom is a great feeling for us. For us that's a very logical perspective - if they are successful it means that we've made money."

Over the last decade, with the rise of digital, the perception is that the role of the publisher has changed. Even recently, with platforms like Steam becoming more saturated and new storefronts popping up, what a publisher has to do has shifted again. But Struthers says that - at its core - the role of publisher hasn't changed.

"The proliferation of games is a good thing," he says.

"We're part of that and we gain benefit from that. It means there are more people to talk to and more opportunity. Our view of ourselves hasn't changed. We've no great ambitions to go and hire 40 people and get an office and change how we work; we like how we work. Most of us have got kids, most of us want to be around them and have that work balance that supports the lives we want. For us, it's business as usual. It means that everyone has a smile on their face."

Looking to the next few years, Devolver is looking to move into new markets as well as make the most of the new and forthcoming platforms in the industry.

"We know what we're doing next year and the year after. It's pretty exciting. We have new hardware coming into the market," Struthers says.

"Then we're starting to do more in areas we haven't worked in before like Korea, China and Taiwan - that's fascinating for me, going out there and getting that flavour of what gamers out there are doing. If there are another ten years, it's going to be this plus trying to be more relevant in those countries. I love travelling, so as much of that as possible, please."

Devolver is doing another E3 press conference and has already apologised