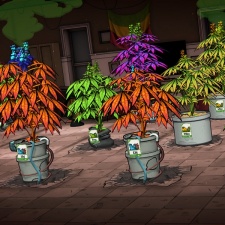 Indie games label Devolver has admitted that there have been unexpected challenges in marketing Vile Monarch’s marijuana tycoon Weedcraft Inc.

Speaking to Techcrunch, Devolver co-founder Mike Wilson explained that dealing a drug salesman sim had proven to be a monumental challenge and that the games industry still holds woefully prudish attitudes to adult themes outside the realm of violence. For reference, Wilson was one of the minds behind the infamous 'John Romero's about to make you his bitch' advert for Ion Storm's Daikatana.

“This is definitely the hardest game I’ve had to market, and that’s saying something,” said Wilson. “It has been a fucking nightmare. The fact that we’re still so afraid of a topic like weed instead of the murder simulators you can market any time, anywhere, it’s shocking.”

As weed currently exists in a sort of cultural grey-area, legal in some countries or US states while an imprisonable offence elsewhere, Devolver commissioned Vile Monarch’s tycoon as a way to explore and capitalise on a complex issue.

But while Steam and GOG.com will sell the game, other storefronts - and all consoles - were blunt with Devolver, sending hopes up in smoke. Facebook and Instagram won’t allow adverts, while YouTube streamers trying the game are finding their videos demonetised.

All of these platforms have explicit anti-drug use policies in their terms of use. But Wilson argues that Weedcraft is a management game, and restricting theme along these lines is ultimately damaging.

“This isn’t a pro-legalisation game. This is a tycoon game. You don’t do drugs in the game! You can play as a totally legal, scrupulous businessperson. We did all this research with like, dispensaries, geneticists, lawyers, we were worried about cultural sensitivity with the subject matter, things like how much more black people get jailed for it.

“We wanted it to be representative of all the social issues involved. It’s kind of like doing a game about booze in the prohibition era — like, what an interesting industry to study, right?”