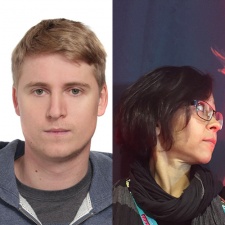 The fast-paced cyberpunk action title Ruinerhit shelves towards the end of September.

SteamSpy pegs the title as having sold close to 40,000 copies on Steam alone, with PlayStation 4 and Xbox One figures not available.

Though this figure doesn't sound like a massive amount, the team at Polish developer Reikon says that this project was always made with a small audience in mind.

"We had a really great first week. We were in the Top Five on Steam," narrative designer Magdalena Tomkowicz (far right) says.

A contributing factor in the game slightly underperforming on Reikon's expectations might have been the difficulty; prior to launch, publisher Devolver Digital said that this should be tweaked, but the studio stuck to its guns.

"We'd definitely have made easy mode differently at the very beginning. People expected that easy would be really simple and you'd be able to go through the game," programmer Marek Roefler (above right) says.

"We believe that the game's difficulty was part of the game; we wanted it to be that way. We were aware the audience is a niche; it's not a mainstream product. This was the kind of people we wanted to get the game to. Afterall, it came out that it's not just hardcore players that were playing Ruiner and that the easy mode wasn't easy enough."

Furthermore, in hindsight the team says it would have changed the perspective the game had; while it opted for a top-down almost isometric viewpoint, a third-person view might have served it better.

"Another thing we'd do differently is we'd do a different camera. 100 per cent," Tomkowicz says.

"I realise how funny it was that when we started making this, we had experience with triple-A titles like The Witcher and Dying Light. We had no experience in small games. For some reason we thought we'd make a 2D game and that would be easy. Then we realised that none of us knew how to do that, so let's make it 3D and top down - that's going to be easy right?

"Then it turned out that it didn't allow us to show what we want to show, to bring players deep into the world we created. Whatever new game we end up making, it's going to definitely be first or third person, because that's what we know how to do best. This camera has its place within the game, and some players noticed it and asked us. It's an industrial camera that follows you, so there's an element of the hacker watching you always. A lot of the detail that we put in there isn't visible enough."

The team has also made changes to the game since launch; in October it released Halloween-themed skins for enemies (above), while this week the Savage Update came out. This included new modes, new game plus, character skins and... no loot boxes (per the accompanying trailer).

"A lot of games are doing this," Roefler says, speaking about the Halloween update.

"We thought why not? It doesn't require a huge amount of work from our side, so we can let people have some fun with this."

Tomkowicz adds: "[The Savage update] is a substantial enhancement of the gameplay. There's a new character involved in these challenges but there's no significant story expansion. I mean, we might work on it in the near future. We could create a big pack to extend the game a bit. But at the moment, we think the people who completed the game want to replay it and try new things and not to have to start from zero."

On paper, Ruiner's launch looked perfectly timed. Launching close to Blade Runner 2049, it appeared it might tap into something of a cyberpunk renaissance. But, as Tomkowicz points out, that film didn't perform that well, showing that cyberpunk is a real niche.

"Honestly, this renaissance of cyberpunk isn't a thing; Blade Runner wasn't a success. This is a thing that's appreciated by a relatively small group of people who like that stuff," she explains.

"This is a thing, but it isn't really. The awareness and the focus of the young audience is totally different now. The youth of today grew up with smartphones and the internet, so cyberpunk is something that's supposed to be futuristic, but it lacks all these things that are everyday objects and create this technological environment that we live in. I know that Gibson doesn't consider cyberpunk a thing himself. He created this idea many years ago but it's already outdated. Blade Runner doesn't appeal to a younger audience. I know most of the audience were 25-plus."

The Reikon team is still in the planning stages for its next project. Though the studio can't go into much detail about its plans, it is likely to be an action title with a science fiction setting.

"There's not much we can say yet because as we said before we are still planning what we are going to do," Roefler says.

"It's definitely going to be a game, but what kind of game, we're not sure. It will likely be sci-fi and action-based to some degree. But still, we haven't got many other details. We have some ideas, of course, but aren't sure which direction to go."

Tomkowicz adds: "So far, our ideas tend to go against what's trendy business-wise. Everyone is into massive multiplayer free-to-play microtransaction games. We are not dismissing the idea, playing multiplayer is fun, but we'd rather focus on games that are really high-quality, well-designed in different ways.

"They aren't big games, but they are the triple-A of the indie space, and story-driven."