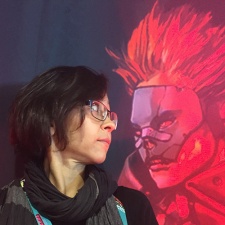 Like many studios set up by ex-triple-A developers, Reikon was founded so that a group of game makers to exercise their creative muscles after years of working on other people’s IP.

Despite these companies being titans of Polish game development, something was missing.

“We didn't have the comfort of doing our own thing. We are passionate about other things – no more zombies, no more fantasy. So we just reached a point where there was nothing more to do. We wanted to do something that would really drive and interest us. I've always been interested in how humanity develops with technology. My father was a computer engineer, so I grew up with computers and all these weird ideas in the '80s. The guys were looking for a challenge in terms of gameplay and coding and so on. We came together and started working on it.”

The cyberpunk ‘Hotline Miami meets Akira’ Ruiner was not the first project that Reikon tried its hand at. Before landing on what would become Ruiner, the developers had ideas for an adventure title as well as a platformer project.

“The seed idea for Ruiner was something of a tower hack, like Die Hard, where the player had to outsmart the guards and so on," Tomkowicz says.

"There's a bit of that still there, but then we played Hotline Miami and loved the sense of the party and the mood that just drags you in where you're in a constant rhythm. It's a one-person party. We connected the dots and started prototyping.”

Tomkowicz says that the game was very much made via prototyping and that it evolved a great deal during this time.

“You cannot make a game based on a script and just follow that – it doesn't work that way. You have an idea and you prototype it and see if it works or not,” she explains.

“If it does, then you expand on that, and if not then you just throw it away. The first tech demo was a bit different – it was in closed spaces, there was no dash, no cybernetic gadgets or abilities that we now have. We felt it was missing something. You walk and fight, but so what? So we introduced the dash mechanic and that changed how we thought about the environment because the movement was different, the pace of the movement was different.

“With Ruiner, everything is very connected. One element provokes elements in many others. Though Ruiner is an action game, there is a story to it and we wanted to tell a story, but we didn't want that narrative to overwhelm players, so we have dialogue and scenes but they are short and light enough that they don't drag users from the fast-paced gameplay. We had to rethink our approach to environment, gameplay and pacing to have these tiny moments where you could say something. It's all very much connected.”

Though Reikon didn’t set out to make a cyberpunk title, Tomkowicz says that it was a case of making a project that included the pop culture that the studio enjoyed. But the likes of Akira and Ghost in the Shell weren’t the only thing that the team took inspiration for – Tomkowicz says that growing up in Poland might have played a role in Ruiner.

“Poland is a country that has experienced a lot of turmoil in recent decades and centuries, so there isn't great comfort in society,” she explains.

“People are constantly tense. They run their errands, they feel they have to take care of many things and they are only just discovering their sense of identity at this point after decades of different dominations.

“We were also looking for a place in this whole mess. What brought us together was this interest in these Japanese worlds that are so great. There's this nostalgic feeling in this future that is distant and alien but at the same time you are looking for something universal and human.”

One thing that is very obvious with Ruiner is its bold and red-centric art style, which was made by Benedykt Szneider. The studio has been making the most of this, too, posting images and gifs (above) on the likes of Twitter to really show off Ruiner’s style.

“Benedykt has a Tumblr account that is full of great gifs from anime, from weird sources,” Tomkowicz explains.

“We felt this connection in the vibe of that and Ruiner. Tumblr is very interesting as it gives this emotional sense of some nihilism to an extent but also looking for meaning and closeness and being cynical towards it. It's this mix of feelings that you get to want but also distance yourself from it. You're never in one place.

“The movement in gifs helps to convey it. The movement is also very important for Ruiner. You either move or die – you cannot wait for your enemies because they will kill you. Whenever I watch some gifs, I see something else each time because of how it loops.

“It's this self-perpetuating tiny little universe. It adds life to it.”

Reikon was chosen as one of the PCGamesInsider.biz Top 20 Developers to Watch