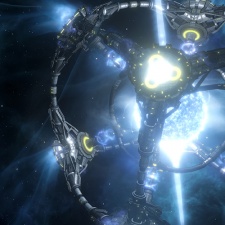 The Overlord DLC for sci-fi strategy game Stellaris has come in at second place in the Steam Top Ten last week.

The content was rolled out on May 12th and charted in second place. It's the sixth full expansion for Stellaris since its 2016 debut and the 15th piece of post-launch content. To date, the Stellaris has shifted over three million copies.

Returning in its regular spot at the top of the charts is Valve's Steam Deck hardware, while Elden Ring slips from second to third place week-on-week.

Meanwhile, indie horror title The Forest returned to the Top Ten in fourth place last week thanks to a 70 per cent price cut on Steam. The game was initially released back in April 2018.

In fifth and sixth spots are two new titles; We Were Here Forever and Songs of Conquest respectively. The former is a co-op puzzle game from developer Mayhem, while the latter is a new Early Access strategy title published by Coffee Stain.

Here is the Steam Top Ten for the week ending May 14th: