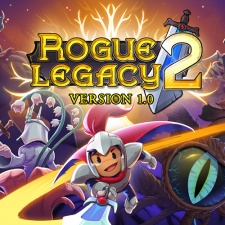 The sequel to 2013 roguelike darling, Rogue Legacy, has risen to third place this week on Steam.

Rogue Legacy 2 from Cellar Door Games was released back on April 28th and debuted in the charts at seventh place last week. Undoubtedly word of mouth about this follow-up has helped drive sales in its second week and the 20 per cent launch discount certainly will help.

The top of the charts is the very much the usual suspects at this point; Valve's Steam Deck hardware sits at the No.1 spot once more, while the latest game from FromSoftware, Elden Ring, holds steady in second place.

Capcom's Monster Hunter Rise rose up two places week-on-week to reach No.4, while the Ultra Deluxe edition of 2013's The Stanley Parable drops one position to fifth. The Valve Index VR Kit charted at No.6, three places higher than last week, with the Game of the Year Edition of Sekiro: Shadows Die Twice fell two places to seventh.

Rounding off the Top Ten is another strategy title, Dune: Spice Wars, which drops from third place.

Here is the Steam Top Ten for the week ending May 7th: