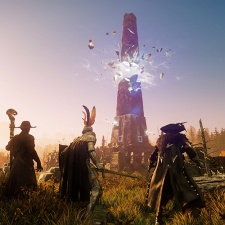 Amazon Games' New World has taken both first and second place in the Steam charts this week.

Pre-orders for the upcoming MMO were the highest selling items on the platform, with the regular edition taking the top spot and the Deluxe version coming in at No.2. New World isn't out until August 31st but a closed beta for the title went live on July 20th that players can access by pre-ordering the title.

The game was initially meant to launch in May 2020 but was bumped back until spring of this year before being delayed until August. There are also reports that New World is bricking Nvidia's RTX 3090 and 3080Ti graphics cards.

Third place went to the Ideology DLC for Ludeon Studios' RimWorld, which launched on July 20th, while EA's F1 2021 drops from second to fourth week-on-week.

Valve's Index VR Kit rose one place to No.5, coming in ahead of Rockstar's Grand Theft Auto V and Red Dead Redemption, which took sixth and seventh places this week. Monster Hunter Stories 2: Wings of Ruin drops from No.1 to No.7 week-on-week; since launch, publisher Capcom says that more than one million copies of the new entry in the franchise have been shipped across PC and Switch.

Devolver Digital's latest title – Death's Door – makes its debut at No.9 while former PlayStation exclusive Days Gone makes a return to the Steam charts at No.10.

Here is the Steam Top Ten for the week ending July 24th: