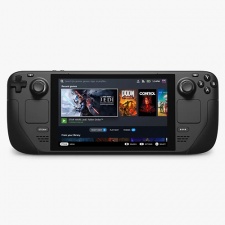 The Steam Deck is a portable console that allows consumers to play their PC titles on the go, while also giving them the ability to hook the tech up to a screen with a dock, much like the Nintendo Switch.

The hardware will let people access their Steam Library from anywhere, in addition to other PC storefronts like the Epic Games Store. As well as the traditional face buttons, thumbsticks and shoulder inputs, the Steam Deck also boasts two touchpads on either side of the screen, which gives an extra layer of control.

For Steam Deck, Valve has partnered with chipmaker AMD and uses its Zen 2 and RDNA 2 tech for its APU.

The hardware is set to launch in December of this year with three tiers available to users looking to pre-order; the first comes with 64GB of memory, while the other two come with 256GB and 512GB of SSD storage respectively, in addition to other benefits.

In May of this year, rumours of Valve working on a portable PC games machine began to circulate.

This is far from Valve's first foray into the hardware market. Back in the 2010s, the company partnered with a variety of OEMs to make the Steam Machines, a variety of boxes that were designed to bring PC gaming into the living room. These launched in 2015 but were very much put on the back burner by Valve rolling out its own Steam Link streaming hardware which did the same thing at a much lower cost. In 2018, Valve coder Pierre-Loup A. Griffais admitted that Steam Machines were not "exactly flying off shelves".

The firm has also partnered with HTC for its Vive virtual reality headset, before releasing its own Index VR hardware in 2019.