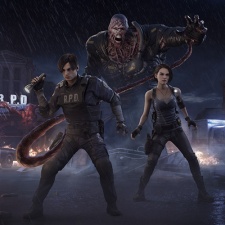 The eagerly-awaited Dead by Daylight and Resident Evil horror crossover DLC was the best-selling title on Steam last week.

Last week's No.1 – Guilty Gear Strive – drops to second place, while the game's Deluxe Edition came in at No.8. Valve's Index VR headset rises two positions to third, while pre-orders for the upcoming battle royale title Naraka: Bladepoint were the fourth most-purchased item on Steam last week. That game is being published by NetEase and developed by Chinese studio 24 Entertainment and is set to release in August.

EA's co-op romp It Takes Two took No.5. It was revealed last week that the game has sold more than two million copies since its March launch.

Worldwalker's Wildermyth came in sixth place following its launch on June 15th, while pre-orders for EA's Battlefield 2042 dropped from No.4 to No.7 week-on-week. Rare's Sea of Thieves came in ninth, ahead of the Prime Status Upgrade DLC for Valve's Counter-Strike: Global Offensive.

Here is the Steam Top Ten for the week ending June 19th: