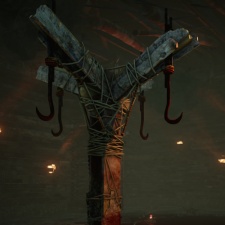 Behaviour Interactive will introduce cross-play to Dead by Daylight "before the end of this year."

As revealed in a fourth-anniversary stream (below) for the survival horror game, producer Stefan Beauchamp-Daniel claimed that cross-friends and cross-play would first be introduced on PC, thus allowing Steam and Windows players to join up.

Later, the features will be released for console players, allowing Dead by Daylight players – seemingly except mobile – to play online together. One of the most sought-after changes for the game is cross-play.

"We expect to have all these platforms being available in the cross-play and the cross-friend features environment before the end of this year."

Beauchamp-Daniel believes that not only will cross-play introduce players to new people; it will also pose a different kind of challenge.

"The other added benefit that we're hoping cross-play is going to bring is that we're going to diversify the meta between different platforms," said Beauchamp-Daniel.

"As we know, people tend to have different habits on specific platforms. Whether it's playing a certain role or playing with a certain character, and by mixing these pools together, we're gonna expose and break the barriers between players and habits of differnt platforms."

While cross-play is much-welcomed news for many Dead by Daylight players, there has been other news recently to excite fans of the horror game. The ever-popular psychological horror franchise Silent Hill has made its way into the game.

Arguably one of the most iconic villains across all media, Pyramid Head will become a playable killer while Cheryl Mason will join as a survivor. Fans of the series will also recognise the new map, Midwich Elementary School.

Behaviour Interactive bought the rights to Dead by Daylight from its publisher Starbreeze in 2018.