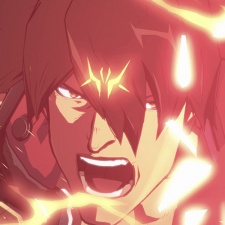 The latest entry in Arc System Works' Guilty Gear series has taken the No.1 spot on Steam.

The fighting game debuted on June 11th, going straight to the top spot for the week. That's despite warnings from Arc saying that consumers shouldn't try to play Strive in 4K as it doesn't support this resolution.

EA's co-op indie romp It Takes Two returns to the Top Ten due to a 25 per cent price reduction. Since its launch in March, the game has shifted more than one million copies.

Pre-orders for fellow-EA title Battlefield 2042 were the fourth highest-selling item of the week following the game's reveal last week. DICE has swapped a historical setting for a more futuristic one with this entry in the franchise, but there's still a lot of excitement for World War Two shooter, Battlefield V, which sits in eighth place thanks to 67 per cent price reduction.

Valve's Index VR headset came in No.5, while The Irregular Corporation's Going Medieval dropped from No.1 to sixth over the course of the week. The Prime Status tier for Counter-Strike: Global Offensive came in No.7. This follows developer Valve making changes to what is available to free-to-play users in the online shooter, namely that they can no longer receive bonuses like XP or ranks.

Rounding up the Top Ten are familiar face Grand Theft Auto V in No.9 while the Season Pass for Ark: Genesis takes tenth.

Here is the Steam Top Ten for the week ending June 12th: