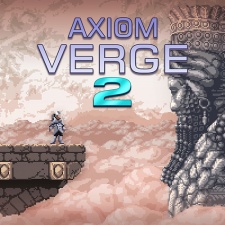 The team at Valve has apparently supported developer Thomas Happ in his decision to make Axion Verge 2 exclusive to the Epic Games Store.

In a blog post explaining his decision to team up with the Fortnite firm for his sequel to the 2015 Metroidvania, Happ said that it was partly informed by wanting to make sure he and his family are financially secure. When he was making the original Axiom Verge, he only had himself to worry about; now he has a wife and child.

Happ admitted that Valve was disappointed by the decision to go with Epic, but emphasised that Axiom Verge 2 will be coming to Steam "eventually."

"The Steam team at Valve has also been incredibly supportive of Axiom Verge, and my decision to partner with Epic on this is in no way a comment on my relationship with Valve," Happ wrote.

"Without Valve’s embrace of indie game development so long ago, there might not even have been an indie scene. No Valve, no indie scene, no Axiom Verge. Before I signed with Epic, my business partner Dan Adelman spoke with Valve and explained our thought process. Although they were disappointed not to have Axiom Verge 2 at launch, they understood that this was the right decision both for this game and my family."

Axiom Verge debuted back in 2015, coming to Steam, before launching on the Epic Games Store two years ago. The title had some issues on this new platform, namely that a key file – named Steam.xnb – had been deleted from Axiom Verge. Hilariously, this had nothing to do with Valve's PC platform.

Since its launch in 2018, the Epic Games Store has paid for the exclusivity of certain games. This has included the likes of Control, which the Fortnite maker paid $10.5 million for. Some indies have argued that these kinds of deals remove some of the risk from releasing a game, with Epic paying out a figure based on sales projections.

Not everyone is on board with this, however. Many gamers have made their hatred of exclusivity deals known by bombarding some developers, including Ooblets maker Glumberland, with hate mail. Epic has condemned this abuse.

In case you're wondering which side PCGamesInsider.biz is on, here's an opinion piece saying that gamers should stop being so god damn angry about developers wanting some degree of financial security.