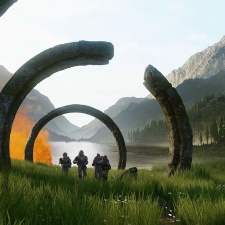 Microsoft's 343 Industries has played down rumours about the upcoming Halo Infinite.

In a post on Twitter, the studio's community director Brian Jarrard said that the "fresh rumours" about the sci-fi shooter are "unfounded." This seems to be referring to the whispers in the games space about a battle royale mode coming to Halo Infinite. This was seemingly set to come to the title next year.

Jarrard does admit that 343 Industries could avoid these kinds of issues by talking more about the game and said that the studio is planning on providing an update about Halo Infinite by the end of 2020.

"I'm aware we could help solve this with real news," Jarrard wrote.

"We certainly have some things we’re overdue on and eager to talk more about. We’re in the process of pulling together a year-end update."

Halo Infinite was initially set to launch alongside Microsoft's new Xbox Series X and Series S consoles in November, but was bumped back until 2021. This followed a rather disappointing showcase of the title earlier this year. Since then, director Chris Lee has departed the project, coming in the wake of creative director Tim Longo and executive producer Mary Olson leaving the title in August 2019. Bungie vet Joeseph Staten has been brought on to lead work on Halo Infinite's campaign.

The studio has said that the title is going to be a "ten-year" game, likely a reference to Destiny, the sci-fi shooter made by Halo series creators Bungie.