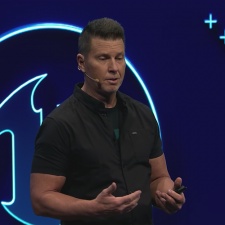 In a press release, the Fortnite maker also revealed that its storefront had hit a peak concurrent user figure of 13m on PC. For comparison, Steam's record for concurrent users is 24.5m, a feat Valve's platform reached in April due to the COVID-19 coronavirus pandemic.

Epic hitting this new milestone came in the wake of its The Vault campaign, which saw the company giving away free titles, starting with Grand Theft Auto V on May 14th. Following this launch, Rockstar's game had online troubles due to the volume of users.

The Fortnite firm teamed up with creative agencies Battery and Havas to promote The Vault.

“Since launching the Epic Games Store, we’ve always wanted to create a huge event around our very successful Free Games weekly program to give something awesome to players worldwide, and we decided to go big," the storefront's GM Steve Allison (pictured) said.

"We invested in acquiring the rights to give four of the biggest games in the world away free. The results have exceeded our expectations. In 2020, we’ve been growing at a historic rate. Epic Games Store partners have a huge audience of players to sell their games to and receive 88 per cent of the revenue, instead of only 70 per cent as on other platforms.”

The Epic Games Store launched at the end of 2018 with the Fortnite maker having an aggressive policy regarding exclusivity. The firm snapped up projects for its platform including Metro Exodus, Borderlands 3 and Control. This strategy has annoyed some gamers, but Epic boss Sweeney insists it's driving engagement with its platform.

As of May 2020, it's estimated that Epic has given away over $2,000 worth of free games on its platform. Sweeney has also said that giving away titles for nothing has helped drive their sales on other storefronts.

This January, the company said that it had attracted 108m PC users to its service.