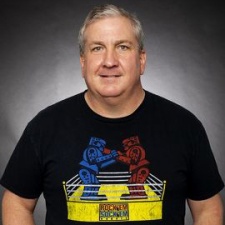 The global head of consumer products at League of Legends and Valorant maker Riot Games Ron Johnson (pictured) has been put on leave and is under investigation after remarks he made about George Floyd.

As reported by Vice, the exec downplayed Floyd's death at the hands of Minneapolis police officer Derek Chauvin in a post on Facebook that featured an image that said: "The media and the left have made George Floyd into a martyr, but who was he really?"

Johnson insinuated that Floyd's "criminal lifestyle" had played a part in his death and that this was an opportunity to teach people that this sort of life "never results in good things."

In a statement, Riot Games said: "We’ve been made aware of the social media post and have launched an investigation. We’ll say firmly that the sentiment in that image is abhorrent, against our values, and directly counter to our belief that addressing systemic racism requires immediate societal change, which we detailed in the commitments we made Friday. While we don’t discuss the details of our investigations or their outcomes, we're following our disciplinary process closely and have placed him on leave pending its conclusion."

Following Floyd's death and the Black Lives Matter protests that have taken place around the world, Riot has committed to put $10m behind minority-led studios in the future, as well as donating $1m to social justice causes starting with The Innocence Project and the American Civil Liberties Union (ACLU).

Johnson was hired as Riot's head of consumer products in January of this year. Since a damning Kotaku exposé about the company's office culture in 2018, Riot has been trying to show that it has improved. At the start of 2019, the studio revealed its new company values in an effort to put the past behind it and brought in Uber vet Frances Frei to help change its working culture. Riot also hired its first chief diversity officer, Angela Roseboro, in March 2019.

Speaking to PCGamesInsider.biz, then-head of UK sports Mo Fadl said that it was trying to make its sports community more inclusive, too.