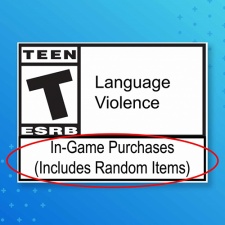 US video games rating board the ESRB will now warn consumers about whether a title contains random item mechanics.

In a blog post on its website, the organisation said that the 'In-Game Purchases (Includes Random Items)' flag (pictured) will be given to titles that allow players to buy digital items or take part in mechanics which mean users don't know what they are receiving. ESRB says that the label doesn't warn of 'loot boxes' as it believes this doesn't cover all the bases it wants to.

"'In-Game Purchases (Includes Random Items)' will be assigned to all games that include purchases with any randomised elements, including loot boxes, gacha games, item or card packs, prize wheels, treasure chests, and more," ESRB wrote.

"Games that have the In-Game Purchases (Includes Random Items) notice may also include other non-randomised paid elements."

This comes more than two years after the ESRB started warning consumers about whether games contained microtransactions. The organisation says that it decided to make a more specific warning about random loot mechanics so that people could make more informed decisions.

In the two-plus years since the launch of Star Wars: Battlefront II in 2017, which brought a lot of attention to the aggressive implementation of loot boxes in video games, the business model has diminished in popularity with developers and publishers somewhat. Many companies have moved towards the Battle Pass model for monetisation, which sees players receiving cosmetic items for a fee that is paid per season of content.