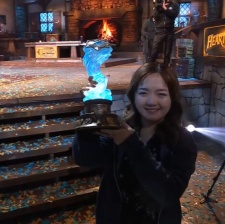 For the first time in the history of Hearthstone, a woman won a major esports tournament.

Xiaomeng “VKLiooon” Li defeated her final opponent three-to-zero in a best of five match at the Grandmasters 2019 Global finals at BlizzCon 2019 in California.

As reported by ESPN, Li had a few words of wisdom for the crowd following her victory:

"I want to say for all the girls out there who have a dream for esports competition, for glory, if you want to do it and you believe in yourself, you should just forget your gender and go for it," she told the crowd after the match.

“This is the best way to strike back at those people who doubted me only because I am a girl. It proves that girls can be strong pro players, just as guys do.”

"This is the best way to strike back at those people who doubted me only because I am a girl. It proves that girls can be strong pro players, just as guys do.” - Xiaomeng “VKLiooon” Li pic.twitter.com/1PQczUHwim

The tournament wasn’t the only major part of BlizzCon 2019, the event played host to several huge announcements. Diablo IV was finally announced - after the less than favourable reaction the mobile game received at the event in 2018.

Overwatch 2 was officially unveiled, this came after a leak of information prior to Blizzard’s annual event.

All eyes were on BlizzCon, following recent events in which the company banned a pro player of its card-game. As a result, Blizzard received a lot of protest from both its community - namely a college team held up a sign in support of both Chung "Blitzchung" Ng Wai and Hong Kong during a live stream - and the publisher’s staff.

Ex-Blizzard employee condemns the company for racism and discrimination