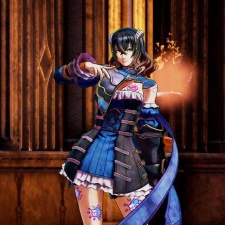 The long-awaited spiritual follow-up to PlayStation-era Castlevania titles Bloodstained: Ritual of the Night has flown to the top of the charts on Steam last week.

Koji Igarashi's metroidvania finally launched on June 19th, published by 505 Games, following a Kickstarter crowdfunding push that launched in May 2015 and raised $5.5m from almost 65,000 people - far higher than its $500,000 goal.

Though it has been repeatedly delayed, Bloodstained may be one of the few 'spiritual successor' titles that has actually hit the mark - similar projects have included Mega Man follow-up Might No.9, which was crucified on launch, while Playtonic's Rare-style platform Yooka Laylee disappointed many fans at release but is widely regarded as being a solid game now.

Second place went to Playerunknown's Battlegrounds - possibly due to the attention the new Lite version is getting due to it rolling out in India - ahead of Creative Assembly and Sega's Total War: Three Kingdoms.

The No.4 spot goes to Devolver Digital's latest synth and cool murder simulator My Friend Pedro, which garnered something of a cult following ahead of launch in part due to hilariously violent gifs on social media. Meanwhile, pre-orders for the eagerly-anticipated Cyberpunk 2077 drop from the top spot to No.6 in their second week.

Here is the Steam Top Ten for the week ending Saturday, June 22nd: