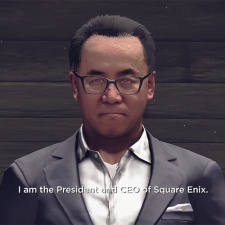 The CEO and president of Japanese publishing giant Square Enix Yosuke Matsuda has said that the firm wants to make the most of the highly sought after games in its back catalogue.

Speaking to Game Informer, the exec said that Square is trying to figure out how to do more with its older games.

"We're working on that in a variety of ways," Matsuda said.

"That is a request that we hear often. As far as our major titles go, most of those, we still have variations out that you can play now. The more classic titles that you might have played on NES, we are still working hard to make it so you can play those. We actually have launched a dedicated project internally to port those, so we are working to make them available on a variety of platforms. Certainly down the road, we would like to see that on a subscription or streaming service, so we're exploring the possibility of creating a dedicated channel for ourselves."

At E3, Ubisoft announced UPlay+, a subscription for PC users that gives access to a variety of content from the French publisher's back catalogue.

On the subject of back catalogues and the digital revolution, the CEO of Codemasters Frank Sagnier has that this has given the market a degree of stability that it was lacking before.