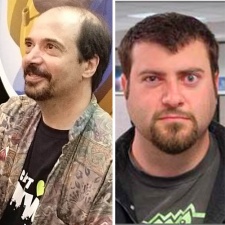 Two of the designers who worked on Valve's Artifact Dota card game have struck back at the notion the title was pay-to-win.

Speaking to Win.GG, designers Richard Garfield (right) and Skaff Elias (far right) - who have since departed - were asked about the criticisms Artifact received on its launch, including the idea that users felt compelled to buy items in the card title to be somehow better.

The game had a strong launch, attracting more than concurrent 55,000 users in its first 24 hours. Over the next few weeks, Artifact saw an 81 per cent dive in concurrent users.

"Pay-to-win is a sloppy term levelled at any game where you can buy components," Garfield said.

"You will see it levelled at any game in which a player, for whatever reason, doesn't want to engage. And there are a lot of reasons not to want to engage with a new massively modular game like Artifact, not the least of which is that the player is already probably invested in one or more other games.

"To me, there are two important parts of pay-to-win.

"The first is whether buying something will make you a champion. This is not true for Hearthstone, Magic, or for that matter, golf. It also isn’t true for Artifact. I am an OK player and a mediocre deck constructor in Artifact, and access to all of the cards won't change that. I might be able to overcome the mediocre deck construction by copying someone else's deck, but it won’t make me an excellent player. Likewise, I can spend thousands on golf clubs, but it won't make me a golf champion.

"Note that some games where you buy components don't pass this test - you can effectively buy infinite army units, skill levels, or hit points in some games, making it possible for you to overcome any problem by spending enough money.

"The second part of pay-to-win is what the bottom line expenditure is. Top level decks in Magic or Hearthstone generally cost more than top level decks in Artifact. And since there is a market, you can shift around your collection with relative ease.

"It is easy to construct games where buying the components is a better deal than all players being forced to buy everything - though some measure of faith has to be put in the publisher."

Elias added: "I agree with Richard. 'Pay-to-win' isn't a logical criticism of Artifact relative to other games. 'More expensive than I'd like to pay' is, however, possibly fair for a lot of players.

"Just because their terminology doesn't make much sense or their reasoning is flawed doesn't mean there isn't some core issue involving the revenue system that they find disagreeable. The key is finding that so you can address it. Finding the signal in the noise falls upon the makers of the game, rather than the customer."

Despite the game's rather disastrous launch - at time of writing its 24-hour peak is just 165 players according to SteamCharts - Garfield believes Artifact could have a bright future if Valve can find the right audience.

"It’s anyone's guess [what the future holds for Artifact]," he said.

"I believe it’s a high-quality game that offers something very different than what’s already out there. It has more kinship with an RTS than any other TCG, for example.

"This could be great for the game if it finds its audience, but 'new' is harder to find a place for than 'similar'. I think the team has an excellent story, if they can figure out how to share it with the right audience.

"For example, it is simply a fact that the revenue model is more generous than Magic, and getting a top level deck is cheaper than in a comparable game. Also, while there are complaints about RNG, it is demonstrable fact that there is much more skill than comparable games, as indicated by the spread of rankings among the players."

Players can sign up for Valve's new Artifact beta test

Artifact has seen its highest concurrent player figure in a year