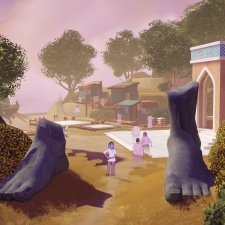 Inkle’s linguist adventure Heaven’s Vault is being reconsidered by GOG.com after the store initially rejected the title.

Despite doing pretty well for itself on Steam and among critics, Resetera users unearthed word that the 80 Days developer’s archaeological dig was rejected by CD Projekt’s store. It’s a curious development, particularly considering how many niche old adventure games have found a home on GOG.

"We can't get into specifics, but they gave reasons stemming from their experience playing an early build of the game and what they think their audience wants,” said Inkle co-founder Joe Humfrey, speaking to PC Gamer.

“We had been hoping that GOG's adventure game audience would embrace Heaven's Vault, and reaching that audience can make a huge difference to whether or not small studios like ours survive. But the game's doing pretty well on Steam, so no complaints there."

That might not stay the case for long. Following the “general reception of the game by the community”, GOG has revealed that it’ll give Heaven’s Vault another look. This time around, it’s likely the store will take a more positive look

A representative for GOG explained: "Our curation is a human process, and we may miss a release that is interesting for gamers. But we’re not afraid of going back and changing a decision if it really makes sense. After all, GOG is built with gamers in mind and we’re doing it for them."

Inkle's history with GOG is spotty. While its breakout hit, 80 Days, is available on the storefront, other titles like Sorcery! are conspicuously absent.

This follows Zachtronics' Opus Magnum being rejected from GOG at the start of 2018, though the puzzle game eventually made it to the storefront.

Mod support is coming to GOG.com - “it’s just matter of how soon”