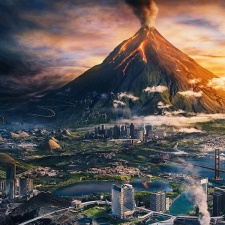 A storm has hit this week’s Steam Top Ten as Sid Meier’s Civilization VI returns to the weekly charts.

Gathering Storm, the second major expansion for Civilization VI, landed on Steam’s shores last week. Pre-sales brought it to No. 10 in our previous chart, but the expansion hit like a hurricane to take the top spot this week.

Excitement for Gathering Storm has had a knock-on effect on both the previous expansion Rise and Fall and the base Civilization VI game. They take No. 9 and No. 10 respectively.

Pink-splattered post-apocalypse follow up Far Cry: New Dawn takes No. 4 this week. Less open world than out-of-this-world, Astroneer left Early Access this month to take No. 5 in the weekly chart.

God Eater 3 slips one spot down from last week’s debut, taking No. 6. Monster Hunter: World and The Witcher 3 close out our coverage this week, forming a fantastical beast-bashing trilogy and No. 7 and No. 8.

XCOM 2: War of the Chosen debuts in second place in Steam Top Ten