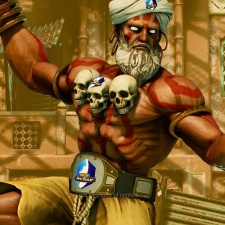 While currently used to advertise in-game bundles and the Capcom Pro Tour esports event, there is widespread concern that fan-favourite characters will soon be coated in external real-world brands.

Many fan complaints also centred on the role advertising in a full-priced release. Adverts are more widely accepted in free-to-play titles, but many fans don’t agree with being nagged into spending more cash after shelling out for access to the game itself.

Much of the concern is simply over how carelessly these advertising decals have been applied to beloved characters, with little blue Capcom Pro Tour logos slapped all over without consideration for context.

In a tweet on the Street Fighter account, executive producer Yoshinori Ono suggested that Sponsored Content isn’t going anywhere, but that the team is looking at ways to improve the feature.

Currently, players are given the opportunity to opt-out of the in-game adverts. But Sponsored Content is enabled by default and players are encouraged to leave it on to earn more Fight Money - Street Fighter V’s in-game currency.