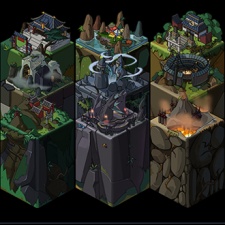 The top-selling game in this week’s Steam Top Ten can’t be played in English.

Early Access title The Scroll of Taiwu made its Steam debut back on September 21st. Evidently, it has found enough of a Chinese-speaking audience to take it to this week’s top spot, with the complex RPG roguelike outperforming even Playerunknown’s Battlegrounds.

While Steam currently exists in a sort of grey area in China, this bodes well for the store’s decision to launch officially in China thanks to a partnership with Perfect World. It's also a strong indication of the potential for the Chinese games market.

With a more western takes on RPGs, Pathfinder: Kingmaker positions itself at No. 3 this week. The first digital take on the classic tabletop system features writing from venerable Fallout and Pillars of Eternity writer Chris Avellone.

Nier: Automata returns to the top ten this week, dropping one spot down to take No.5. Fellow Square Enix action-adventure Shadow of the Tomb Raider loses more of its foothold, stumbling 4 places down to take No.6.

Pre-orders for Assassin’s Creed: Odyssey takes the latest entry in Ubisoft’s historical stab simulator to No.8. Expect the Greek adventure to be more service-based than previous entries, thanks to Ubisoft’s plans to move away from “finite experiences.”

Not content to pick between either MOBA or battle royale, Battlerite Royale smashes the two together to take No.9 in this week’s chart. Middle Earth: Shadow of War closes out the list at 10, thanks to a 66 per cent discount.

Finally, that Counter-Strike sticker pack is still in the Top Ten, down at No.7 this week.

Below is the Top 10 for the week ending September 29th: