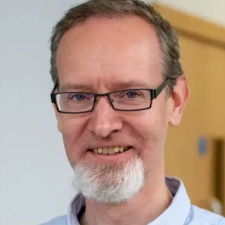 The investment will go towards development and distribution of the company’s flagship title, Axiom Soccer. Earthbound sought external finance in order to publish the game itself rather than through a publisher.

The funding comes courtesy of a number of backers with “a track record of investing in the games and technology industries".

The Scottish studio’s debut features competitive one-versus-one football in armed vehicles - think Rocket League but with guns. The studio hopes that self-publishing will not only bring it closer to its player-base but also attract potential future backing.

“We’ve put the publishers to the back of the equation with Axiom Soccer,” CEO Chris Stamp (pictured, main), told The Scotsman.

“That’s allowed us to take a truly player-first approach and connect the development of the game with our community.”

Board director Neil Heywood added: “Equity funding and self-publishing isn’t the traditional way to make and distribute high-quality PC games. But if you’ve got a great game, there’s an opportunity to create a community, by communicating directly with the players.

“That’s meant we could attract support from a number of backers who are already involved with and enthusiastic about the industry. We all believe that Axiom Soccer is going to be a great success.”