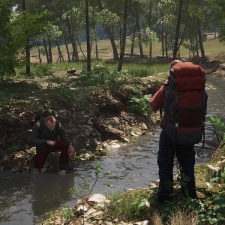 Update:SCUM has sold over 250,000 units within 24 hours of launching on Steam.

Gamepire’s intrinsically-detailed sandbox has already become publisher Devolver Digital’s most successful launch yet. The game managed to peak at just over 50k concurrent players shortly after stepping into Early Access.

Developed with support from Croteam, SCUM’s success is a surprise given the industry’s shift away from DayZ-style survival towards battle royale. The title’s unique sell is an obsessive simulation of body statistics, where physical fitness is as important as any weapon.

The SCUM community has been incredible and we’re thankful for the over 250k copies sold in less than 24 hours!

Rest assured, the team is working on updates to give you a best in class survival game. pic.twitter.com/RLzfhfL0Kx

Steam Stats confirms a peak concurrent counts of 50,282 players. Evidently, that’s far more than the developers anticipated - SCUM has been experiencing server issues due to the demand.

“As you might imagine, we never dreamed of such a huge flood of eager players trying to play our game,” said a representative for Gamepires on the community hub.

“The interest is way higher than even the most optimistic projections we had internally, so it comes as no surprise that connecting to a server will get difficult at times.”

The successful release awards SCUM the title of Devolver’s most successful launch to date - a title previously held by martial-arts multiplayer title Absolver at 30k peak concurrents. The publisher announced the news through Twitter (below).

And SCUM is already our biggest launch ever. Congrats to @Gamepires!