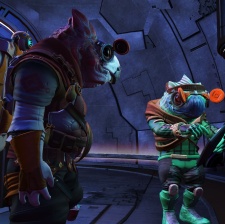 Just under 100,000 concurrent explorers played No Man’s Sky on Steam this weekend.

We reported last week that No Man’s Sky peaked at over 50,000 concurrent players following the substantial NEXT update. Now, it appears Hello Games’ 2016 spacefarer peaked at 96,954 players on Sunday according to tracking site Steam Charts.

That figure marks almost half of the game’s launch-period peak of 212,000 concurrent users. However, it’s substantially higher than pre-patch concurrent counts, with Steam Charts reporting a 1229.09 per cent increase.

NEXT has brought new life into a game that many appeared to have written off, dislodging Monster Hunter World pre-orders to take the top spot in last week’s Steam Top Ten. Since the patch hit last week, No Man’s Sky’s review score on the platform has improved from “Mostly Negative” to “Mixed” - a big shift considering the vitriol and negativity surrounding the game's launch back in August 2016.

Hello Games is yet to release any player or sales figures for No Man's Sky, but we have reached out to the studio to see if it can tell us more.