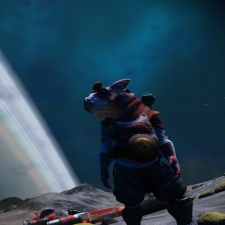 No Man’s Sky’s ‘Next’ update has rocketed concurrent player counts up to 54,000 on Steam alone.

A quick look at Steam Charts shows an immediate jump in concurrents after the game’s third major update dropped this Tuesday, reaching a peak of 53,996.

While still well under the game's 200,000 concurrents on launch, the update represents a significant leap for No Man's Sky user counts. Prior to Tuesday's update, the game was skimming around 3,000 concurrents, but rockets up to 40,000 after the update hit.

The following day, No Man’s Sky peaked at just under 54,000 concurrents. The two year old, controversy-stricken game currently sits at No.9 on Steam’s most-played titles, behind fairly concrete staples like Dota 2 and PUBG.

No Man’s Sky Next brought a freighter full on new features to the space sim, including character customisation, improved world generation, and third person perspectives. But the big ticket seller was the inclusion of fully-featured multiplayer, a feature whose absence drew much ire at launch.

Hello Games went conspicuously silent after launch, following widespread backlash. On re-emerging into the public eye for Next, studio head Sean Murray spoke of how Hello turned to the police following backlash to the game’s launch.

As sour as some gamers may have been though, No Man’s Sky doesn’t seem to have been a failure. The game racked up more than 200 million hours of playtime since launch, with one million players jumping in the day before Atlas Rises - No Man’s Sky’s previous big update.