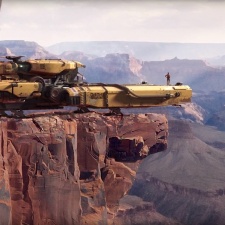 The playerbases of Eve Online and Star Citizen traded blows this week over a “copycat” spaceship.

Cloud Imperium announced a new ship design for the eternally in-development game on June 14th, called the Vulture. Fans of the venerable spreadsheet and subterfuge generator Eve Online immediately began drawing comparisons to the Venture, an entry-level mining ship. Of course, the Star Citizen ship will still set you back $112 - significantly more than starting miner in a free to play game.

With a shared love of bold yellow paint schemes and two forward-facing arms, the similarities are hard to ignore. Even the name is only a few letters removed. In a development update, Cloud Imperium cite another ship - the Dragonfly - as inspiration for both the colour and shape of the Vulture. It wasn’t long before even Eve developer CCP weighed in with a cheeky tweet: “They say that imitation is the sincerest form of flattery”.

Naturally, the situation escalated over on Reddit as the back-and-forth grew from light-hearted memes to hostile confrontations. Moderators have been dragged into war, with sides accused of “vote-brigading” - the act of intentionally flooding a thread with up / down votes to force the raising / burying of a topic. Brigading is against Reddit’s rules, which could spell trouble with the entire subreddit accused of engaging in the act.

Both Eve Online and Star Citizen are known for having “passionate” communities, and it’s not out of the ordinary for conflicts like this to emerge between the two giants of space sandbox games.

They say that imitation is the sincerest form of flattery