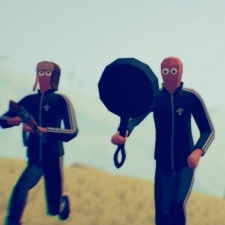 Originally conceived of as an April Fool’s Day parody of the genre, Totally Accurate Battlegrounds (TAB) is a bit of a laugh at the current state of battle royale games flooding the market. The Steam store listing even explicitly positions it as “a parody of the battle royale genre.” Releasing earlier this week, TAB peaked at 20,846 concurrent players according to Steam Charts.

Battle royale bedfellow H1Z1 hasn’t seen numbers like that since March, in spite of going free-to-play a week after its launch that month. Later weeks would see layoffs hit developer Daybreak Studios. The title has been around in one for or another since entering Early Access in 2015. Brendan “Playerunknown” Greene was notably brought aboard to consult for its own battle royale mode, before moving to work on his own title.

H1Z1 wasn’t the only genre entry to fall short of Totally Accurate Battlegrounds, however. Realm Royale (formerly Paladins: Battlegrounds) launched into Early Access around the same time. Developer HiRez’s more class-focussed entry into the space only managed a peak concurrent count of 11,577 players - just over half of what TAB managed.

It’s important to note that all three of these titles are free - for now. Totally Accurate Battlegrounds will only remain free for the first 100 hours of sale - after that, expect to fork out $4.99 for the bouncy, lo-fi take on last man standing.