Now Paladins is getting a battle royale mode 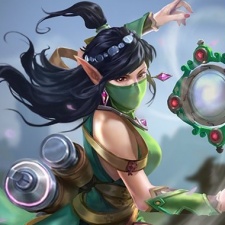 This isn't entirely unprecedented when it comes to Paladins - the title has incorporated aspects of other popular games, such as card battling mechanics, but this is probably the most aggressive new feature yet.

As announced at Hi-Rez Expo, this mode features a large map, one that developer Hi-Rez boasts is 300 times larger than the biggest map in its Siege mode - with 100 players dropping in and looting and killing.

"Designed from the ground-up to be played in teams, players must work together to survive in Paladins: Battlegrounds," said Hi-Rez.

"Supports struggle to keep their Front Liners alive, while Damage Champions let the bullets fly and Flanks look for any possible assassination.

"Players spawn into a massive map—over 300 times the square footage of a typical Paladins' Siege map. Then they hop onto their mounts and begin exploring, looting their way through more than four dozen outposts and tracking zeppelins that drop legendary gear."

Given that PUBG Corp got into a public spat with tech and software company Epic over its own Fortnite battle royale mode - given that the former was using the latter's Unreal Engine 4 - one can only imagine how the Playerunknown's Battlegrounds maker will react to a sizeable title using 'Battlegrounds' in its name.

Creative director Brendan Greene spoke to the the rise in popularity in battle royale games, telling PCGamesInsider.biz that he hoped to see more innovation rather than other projects using elements he feels he introduced.

The developer has also said that he wishes games were better protected from copycats.

It's easy to see why people are copying Playerunknown's Battlegrounds, however, with more than 30m downloads to date.

Here is a trailer: