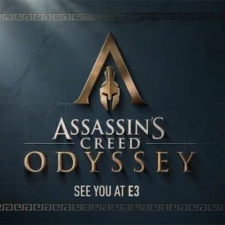 Assassin's Creed Odyssey is the next entry in the French publishing giant's flagship franchise. The project was outted by Jeuxvideo-live.com, who posted an image of a keyring showing the title's logo and name with hints at a Greek setting.

The title is said to be something of a follow-up to Assassin's Creed Origins.

Odyssey has since been officially revealed by Ubisoft, who took to Twitter (below) with the game's name and logo saying 'See you at E3'.

See you at E3! pic.twitter.com/03NTPhCkCf

Rumours of a new entry in that series are also doing the rounds, with reports of a London setting this time around.

Moving to a new entry every two years as opposed to every single year was a smart and bold move that appeared to pay off for Ubisoft. Origins launched to critical acclaim and was seen a breath of fresh air in a franchise that had become rather samey. Following its success, the publisher seemed to be wanting to give its developers more time on their projects, too. The fact that merchandise is in the wild implies that a launch is imminent, potentially even this year.

That being said, it also makes sense for Ubisoft to capitalise on this success, as well as make the most of the new formula it has started with Origins.

Odyssey is the latest title to leak ahead of E3 after Bethesda's Rage 2 was accidentally revealed by Walmart Canada.