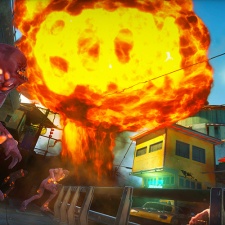 It sure sounds like Insomniac Games' 2014 Xbox One exclusive Sunset Overdrive is making the leap to PC.

That's if we're to believe word from the famously-leaky and often-accurate Korean ratings board, which has classified a PC SKU of the colourful action title.

If we were to speculate - and we are going to, thank you - the title will be announced during Microsoft's E3 press event next month. The title was published by the Xbox firm and until this point has remained exclusively with the platform.

Given that it's a first-party release, it may also be part of Play Anywhere, meaning that those who own the game on Xbox One will get it free, making for a nice 'and it's out now' PR moment for Microsoft. It could also end up on Game Pass.

Insomniac has expressed a desire to bring the game to PC in the past but was waiting on the OK from the big M.

If Sunset Overdrive makes the leap to PC, that leaves very few actual Xbox One exclusives. Only some Halo games remain, but this speaks to Microsoft employing a broader strategy for its ecosystem.

The firm - having decisively sat in second place for this entire console cycle - has worked instead on future-proofing its platform rather than simply playing Sony's game in the console space. That it has a PC market to work with as well as its console one is an advantage that it is smart to utilise.