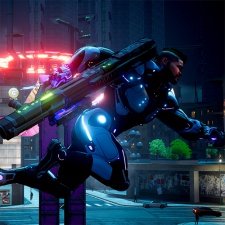 Update: Publisher Microsoft has confirmed that Crackdown 3 will once again be missing its release window.

In a statement, the PC and console firm said that the game will be launching in February 2019, and that more details will be coming at E3 next week.

“Our fans’ response to the signature antics and explosive gameplay of Crackdown 3 has been incredible," the statement said.

"To ensure we deliver the experience they deserve, Crackdown 3 will be launching in Feb 2019. We look forward to sharing more on Crackdown 3 this Sunday during the Xbox E3 2018 briefing.”

Original story: The latest entry in the Crackdown franchise has once again been delayed.

Word comes by way of Kotaku - with Eurogamer saying it too has heard similar - that the project has been pushed back to 2019.

This isn't the first time the super hero game has been given the bump. Originally revealed at E3 2014 with a 2016 release date, the project was subsequently pencilled in with a November 2017 launch. That was before the title was pushed to spring of this year, and then the summer.

Kotaku's sources say that the delay is to give the team more time to turn in a great product - which begs the question of what state other cancelled titles, such as Scalebound and Fable Legends, were in to get the chop.

What has gone so wrong with the project is unclear; it certainly has some talented developers working on it. Sheffield-based work for hire outfit Sumo Digital is the headline act while the developers of the first two games - Reagent (with staff of Crackdown devs Realtime Worlds) and Ruffian Games helping out.

Nothing has been confirmed just yet, but one of Microsoft's few close-to-launch first party releases dropping out of its roster right before E3 isn't exactly ideal.