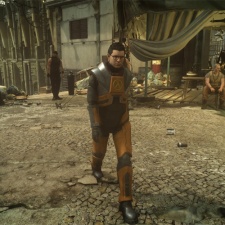 2016's Final Fantasy XV is coming to PC at long last with a certain icon of the platform making an appearance.

Well, kind of. Gamers who pre-purchase the title will get the orange and black HEV Suit (pictured) worn by Gordon Freeman, the protagonist of Valve's Half-Life franchise.

We're sure there's a joke about Half-Life 3 in there somewhere.

Furthermore, there is a demo for Final Fantasy XV Windows Edition launching on February 26th

The Windows version of Final Fantasy XV was announced at Gamescom 2017, with the game's director saying that development on PC was '100 times' easier than the console versions.

As with most PC releases, the game is getting mods, but Square Enix has said that future games will not feature this support if gamers aren't responsible. Which is to say that the Japanese publisher almost definitely isn't doing mods in a PC game ever again.

This release comes with all existing Final Fantasy XV content, as well as 4K support and a first-person camera mode.

This isn't the only recent example of Square Enix toying with other franchises; Final Fantasy XV protagonist Noctis appeared in Tekken 7, while characters from that game have made an appearance in Assassin's Creed: Origins.