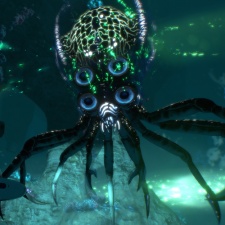 Open-world sea survival game Subnautica is this week's top dog on Steam. Well, it takes second place but given that PUBG isn't going anywhere, this is pretty much the new No.1 spot.

The game launched out of Early Access on January 23rd to positive reviews; last week it was the tenth most purchased item on Steam. As well as PC, the game also supports Oculus Rift and Vive, which could potentially be a minor sales driver. The game has in the region of 1.7m players (SteamSpy data).

Third and fourth places go to Dragon Ball FighterZ. Why this game has appeared twice is unclear - given that the fighting title only launched on Friday, it's possible that one of these entries could be pre-orders - our money is on No.4 being that SKU.

The Rise of the Tomb Kings DLC for Total War: Warhammer II was the fifth most-purchased item on Steam last week. Creative Assembly's RTS series has become known as one of the best in the genre, so seeing DLC popping up in the Top Ten is not surprising. The developer has another two Total War games coming out, alongside its content that will link the two Total War: Warhammer games.

Meanwhile, seventh and eighth places are the domain of Valve's own Counter-Strike: Global Offensive. The No.7 spot goes to the game itself, with the next position filled by the accompanying bundle for the Eleague 2018 Boston CS:GO Major Championship which ended on Sunday, January 28th.

Curve's Human: Fall Flat dropped six places to No.9, with 1.7m players according to SteamSpy.

Closing out the charts is recent Team17 release, My Time at Portia. This title charted at No.10

Below is the Steam Top Ten for the week ending January 28th: