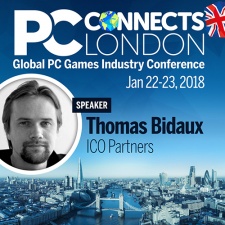 As part of our State of Play track, Ico Partners chief Thomas Bidaux will be sharing some insight into the crowdfunding market in 2017. In the run up to the conference, he has been kind enough to share some topline figures and analysis with us

Today, I would like to offer a wider view of the state of crowdfunding across multiple platforms for video games, with this chart based on our own collected data (below).

Crowdfunding for video games is often discussed when very large projects get funded and they are, by far, the biggest drive when a large amount of money is raised any given year.

In 2015 for instance, a record year for video games on Kickstarter, the numbers are massively influenced by campaigns like Shenmue 3, Bloodstained and Yooka-Laylee. These three campaigns represent a third of the money raised by 370 video games successfully funded on the platform that year.

What does it mean for the performance of video games on crowdfunding platforms in 2017?

The numbers are relatively stable. The total amount of money we estimated was raised is a little short of $25m in 2017, less than a two per cent drop from 2016.

There were only three projects that raised more than $1m, and each project was funded on a different platform: Ashes of Creation found its success on Kickstarter; Pillars of Eternity 2 sought its funding on Fig; and Noob The Video game was the first video game to raise more than $500,000 on Ulule, a platform particularly popular in France. Noob is the largest campaign the platform has ever hosted. While I won’t go as far as to say that platform doesn't matter - it does - it elegantly highlights that the communities are what matter the most.

Looking at raw numbers of projects, Kickstarter is still the uncontested leading platform for video games crowdfunding, with 350 video games campaigns being successful there in 2017. That, however, represents a nine per cent drop from 2016, with some of those projects going to other platforms like Fig. There is no growth, then, but there is no collapse either.

The truth is, few video games genres are really suited to a crowdfunding campaign, and this volume seems to represent the current pool of projects with that suitability. Crowdfunding is also rightfully seen as a time-consuming exercise, with the quality of the campaigns having dramatically increased over the years.

Having a strong name is no longer a shortcut to funding, as the Apocalypse Now video game campaign discovered the hard way early in 2017. The “wisdom of the crowd” didn’t take kindly to the project skipping on providing important information on the game itself, and didn’t deem it worthy of support. This is not to say that crowdfunding is not worth that investment of energy and resources, though. For the rights projects, it is a boon, with benefits beyond the funding itself.

If you feel you want to try your project into the crowdfunding arena in 2018, I will provide further insights on the current best practices and the latest trends at PC Connects.