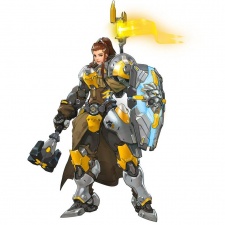 Hi-Rez Studios’ Paladin is once again being compared to Blizzard’s Overwatch, but this time it is the former that is pointing the finger.

The president of Hi-Rez, Stewart Chisam, has taken to Twitter (below) to vent his frustrations about the perceived similarities between the newly-announced Brigitte Lindholm (pictured) to Paladins' own Ash.

Hi-Rez has been accused of copying Overwatch before, something that co-founder Todd Harris has previously refuted in a lengthy post that mentions how Paladin’s characters were available to play in beta long before Overwatch was around.

Quick poll: If I happened to notice and point out any similarities between these two characters, would that make me the Pot calling the Kettle black, or the Kettle calling the Pot black? This will keep me up tonight unless I get a clear answer. pic.twitter.com/rt9j3NT0S0

Alongside the similarities, there are some differences. Ash has a gun, whereas Brigitte has a rocket flail, and although the abilities are very similar, they don’t work in exactly the same way. Brigitte’s look is very similar to Reinhardt, whom she makes armour for in the story, so it is more likely that Blizzard wanted the two characters to look very similar than the design being a direct copy.

Paladins was also in the news again recently for introducing a Battle Royale Mode called Battlegrounds.