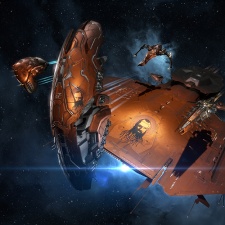 Eve Online developer, CCP Games, has announced that it has released a limited edition cosmetic skin set for certain spaceships in the game, with all profits to go to the fiancée and daughter of late staff member, CCP Blaze.

CCP Blaze passed away on November 14th, aged 35. He was a senior software engineer with the company’s audio and graphics team for eight years. The dev blog post states that he: “leaves behind an amazing legacy at CCP.”

The SKIN set is named ‘Blaze’ Squadron, in honour of CCP Blaze; and includes an image of CCP Blaze as part of the design. The SKIN set is available in a bundle for five ships for 495 PLEX (the in-game currency); and, separately, for the Armageddon, CCP Blaze’s favourite ship, for 110 PLEX (roughly $2.80). These are available to purchase in Eve’s New Eden Store now, for a limited time only until ‘downtime’ on Tuesday, December 19th.

In said CCP dev blog post, the author, Team TriLambda, says: “To honour CCP Blaze’s love for EVE Online and his many years as an EVE player, we’ve also chosen to write him into backstory as an immortalized part of New Eden’s history.”

Part of the in-game text description of the ‘Blaze’ Squadron SKIN reads as follows: “‘Gone, but never forgotten. His name lives on in all of you. Hoist his colours, and decimate anything that stands in your way.’ Trald Vukenda – CEO, Dominations.”

A similar goodwill gesture was made by Warner Bros. towards the family of late Shadow of War executive producer, Mike Forgey. A portion of profit from every sale of a DLC character, designed in homage to Forgey, went to his family. The handling of this gesture was met with a little controversy; some saw it as distasteful profiteering by Warner Bros.

CCP turns 20 years old this year. We interviewed the company's CEO, Hilmar Veigar, to find out more about the Icelandic firm's history.