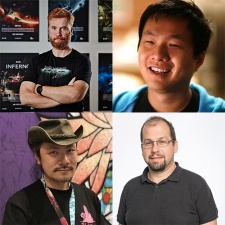 The speaker line-up has been revealed for G-STAR 2019.

G-STAR 2019 is taking place between November 14th and 15th 2019 on the 1st Floor Conference Rooms at Busan's Exhibition Centre 2. Tickets cost just $70 and are available right up until November 12th. You can sign up here.

The organisers are expecting over 2,000 trade visitors from more than 42 countries, with a huge 230,000 consumers coming to check out the show.

Jenova Chen, CEO - That Game Company [KEYNOTE]
Hear from the indie team responsible for the stylish, classic adventure games Journey and (most recently) Sky: Children of the Light.

Koji Igarashi, CEO - ArtPlay [KEYNOTE]
Forever remembered as the man behind the Castlevania series of games, Koji Igarashi’s new company has created Bloodstained: Ritual of the Night and he’ll be introducing it on stage.

Hilmar Veigar Petursson, CEO - CCP Games [KEYNOTE]
CCP Games is a game studio from Iceland that developed EVE Online in 2003 and continues to maintain it to this day. Hilmar will discuss creating virtual worlds and how they are more meaningful than real life.

Frank Keienburg, Game Lead - Supercell
Frank has been working in the games industry for nearly 14 years. He was the lead developer on the worldwide smash hit Brawl Stars and will discuss the game in detail in this talk.

Linda Fane, Senior Agility Lead - Bungie
With four years at Bungie, the Organization Director of Destiny will speak on process agility and how that helped Bungie keep moving forward.

Youngsoon Yang, Writer - Naver Webtoon
Youngsoon Yang is the writer of Denma, a space opera about an intergalactic courier called Quanx. This webtoon is extremely popular in Korea and has been translated into Japanese and English.

Daigo Sato, CEO - Odencat
Daigo Sato is an indie game developer who created Bear’s Restaurant on iOS and Android. This talk concentrates on how to make mobile games that survive in today’s crowded marketplace.

Hyung Tae Kim, CEO - Shiftup
Korean art director Hyung Tae Kim is famous for his designs, including the art for the War of Genesis series and Magna Carta. He now heads Shiftup which has new games in development - needless to say, they look gorgeous.

Patrick Rose, Founder - GAMES ANALYSTS
Patrick Rose has years of experience working with triple-A titles. He will share that knowledge with attendees in this talk about game design, monetization models and tech.

Bae Hyunjik, CEO - Nettention
Bae Hyunjik is the CEO of Nettention and was the lead directing programmer of ProudNet - a game server and network engine for game developers. This talk will focus on the physiology of game server development for game producers.

Ethan Kim, Founder - Hashed
Hashed are becoming known as the masters of blockchain in Korea and in this session founder Ethan Kim will reveal the current state of the market and look at what the future holds.

Michael Csurics, Founder - The Brightskull Entertainment Group
Best-known for raising the bar in in-game dialogue and voice performance, Michael Csurics has worked on many titles, most notably Bioshock 2 and Just Cause 4.