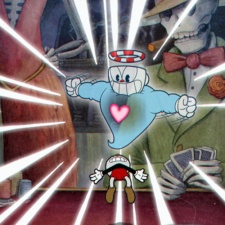 Yes, Playerunknown’s Battlegrounds is top of the Steam rankings again, but that other title that everyone is talking about has charted in second place.

MDHR’s Cuphead takes the No.2 spot having debuted in fourth place last week. The long-awaited indie title has been the subject of a lot of press, mostly good but occasionally bad.

Meanwhile, Total War: Warhammer II comes in… both third and ninth places. We’re going to presume that’s an error on Steam’s Top Ten RSS feed and have reached out to Valve to see which game came where. Given that this is an automatically generated feed, mistakes sometimes do happen.

Meanwhile, Divinity: Original Sin 2 drops just one place to No.4, while pre-orders for Middle-earth: Shadow of War were the fifth most-purchased item of the week. The review embargo for the title broke last week, which likely caused it. Currently the PC version has an 81 on Metacritic.

Fellow Warner Bros release Dying Light charted at No.7 due to a price cut.

And in tenth place was Battle Chasers from THQ Nordic. This RPG hit shelves last week and already has in the region of 36,000 owners, according to SteamSpy.

Below is the Steam Top Ten for the week ending October 8th: