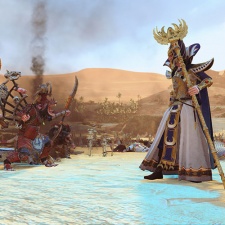 RTS game Total War pushed the previous two-week incumbent, Divinity: Original Sin 2, off the No.2 spot. Last week, Total War was fifth in the chart, based solely on pre-orders, and the game released on Thursday, September 28th to strong sales.

StudioMDHR’s hyper-stylised cartoon 2D run and gun-er, Cuphead, entered the Top Ten for the first time, having been released on 29th September. It has received “Overwhelmingly Positive” Steam reviews thus far, with 97 per cent of over 4,000 reviews being positive.

Visual novel Danganronpa V3: Killing Harmony and Early Access title The Guild 3 are both new entrants to this week’s chart and were both released on September 26th.

Spike Chunsoft's Danganronpa main series games had been PlayStation-exclusives until early 2016, when they first became available on Steam. The Top Ten charting of V3 follows a trend of high-profile successes of visual novels; for instance, Dream Daddy: A Dad Dating Simulator by Game Grumps and Love Conquers All’s Ladykiller in a Bind.

Assassin's Creed Syndicate appears at No.8, presumably in anticipation for the soon-to-be-released Assassin’s Creed Origins, which comes out on October 27th.

Call of Duty: WWII is the only pre-order title in the chart. Call of Duty’s publisher, Activision, has been running a PC beta for its Second World War shooter, which will have assisted pre-orders. The game is due for a full release on November 3rd.

Below is the Steam Top Ten for the week ending October 1st: