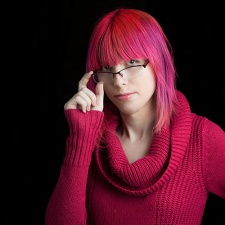 At the end of last year, Canadian developer Christine Love – and her studio Love Conquers All – released a... somewhat interesting title.

Initially released in October 2016 on Humble, Ladykiller in a Bind is a comedy visual novel with a kinky flare that apparently has done rather well for itself. Earlier in July, Love announced via Twitter that the game had managed to break even on its budget – something the developer thought would take years, not a matter of months.

“Honestly, it was a huge relief,” Love says.

“I’ve been trying hard to structure things such that we don't take on debt to fund a project, so there was never any risk of it sinking us or anything, but it would have been a real disappointment if it meant we had to scale down for what we do next. Given how weird and risky Ladykiller was, I figured it would probably have taken us a lot longer to get there.”

Prior to launch, Love and her small team didn’t really have much in the way of expectations for the quirky release.

“Thankfully, Humble was willing to support us, but we didn't end up launching on Steam at first because of the sexual content – although Valve ultimately did turn out to be okay with it after our launch on Humble – which meant we were a lot more conservative about pricing than we might have otherwise been. Frankly, I figured we'd be lucky if we'd even made back our budget after a couple years. Hence my relief.”

But why has the game resonated with consumers? Love says there are two factors.

“I know I have a pretty dedicated fanbase that I was really counting on to appreciate how complex and experimentally narrative it is, and they definitely came through—I can't appreciate enough how much they support me no matter how superficially weird or different my games get,” she says.

“Even in indie games, I do see a lot of developers thinking very conservatively about how to appeal to their fans and not putting enough credit in the fact that they probably want to see something sincerely new, rather than trying to cynically pander.

“Past that, though... well, video games obviously have a lot of issues to work out with regards to sexuality, and that's clearly left a very big gap in the market. It seems very obvious to me that there's a real audience out there interested in romances written by and for lesbians, and want romance stories that don't tiptoe around how sex matters in relationships. Myself included, obviously.”

The game’s performance confirms something that Love had previously suspected; that success is possible in the current market if titles appeal to people not normally seen in video games.

“It's a lot easier to find niche success by doing something that appeals intensely to underrepresented people than it is to try to chase big mainstream money and get lucky,” she says.

“There's a lot of talk about ‘the indiepocalypse’ and devs who think that Steam's disinterest in gatekeeping has made it harder to be successful as an indie dev than ever... but I can say that Ladykiller launch on Humble was my biggest launch by far, even bigger than my last game was on Steam back in 2013. I'm not going to say that we didn't get a modest sales boost when we finally did get on Steam, but it's clear that they're not the end-all-be-all of indie games success anymore. What's important is obviously being able to stand out as unique to your audience.”

So, with this success under their belt, what comes next for Love Conquers All?

“After three years of development, we were pretty burned out, and were mostly focused on getting some rest,” Love says.