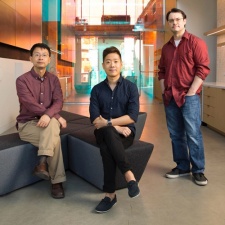 The venture is being founded by veterans of Blizzard entertainment in lead producer Jason Hughes, lead designer David Kim and lead engineer Zhongshan Zhang (pictured right to left). The studio is sitting under Tencent's Lightspeed and Quantum Studios division and has been established in Playa Vista, California.

Kim was previously principal game designer at Blizzard, having joined the firm back in 2007, and had worked on the likes of World of Warcraft, Diablo 4, Starcraft 2 and Heroes of the Storm. Meanwhile, Hughes worked at Blizzard for six years, primarily on the Diablo franchise but most recently on free-to-play card game Hearthstone.

Finally, Zhang worked at Blizzard on StarCraft 2 between 2005 and 2013, and has also held roles at Magic Leap, Foundation 9 and Ubisoft Shanghai.

"Making the next great PC RTS has been my goal for almost a decade now, and Lightspeed and Quantum is giving us an awesome shot at making that,” lead designer Kim said.

“Putting together a team of great developers with lots of experience and being backed by the right people who also believe in RTS as much as we do, is our first big step in getting there."

Tencent VP and president of Lightspeed and Quantum Studios Jerry Chen added: “Uncapped Games is going to be an exciting new studio that fans of the real-time strategy game genre will want to follow. I am a huge fan of action-packed RTS games, so I pushed hard to bring them on and make this project happen. They’re a great example of our philosophy around building studios which is ‘go to where the talent is,’ and with Uncapped Games, that led us to David and Jason. We couldn’t be more excited to see what this team is going to build.”

Uncapped Games Studios is the latest venture to be set up by veterans of Blizzard. The company's co-founder, Mike Morhaime, established a new studio called Dreamshaven in 2020, following his departure from Blizzard, while some fellow alumni opened Frost Giant that same year.

Meanwhile, some Blizzard and Epic vets set up Lightforge Games in May 2021.