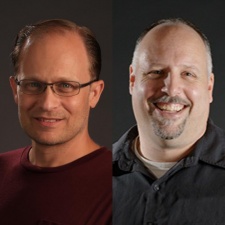 The duo has secured $4.7m in seed funding led by BitKraft Ventures, while 1 Up Ventures, GC Tracker, Riot Games and Griffin Gaming Partners also threw some cash the developer's way.

Frost Giant plans on working on the real-time strategy genre, with the aim of lowering the barrier of entry to these types of games. The studio currently employs five people, according to LinkedIn.

Morten is serving as CEO and production director, having previously worked in the same role at Blizzard since 2014. His career started back in 1994 when he worked as an engineer and producer at Activision, before moving to Savage Entertainment as CEO in 1998. He was with that firm for over 12-and-a-half years before being snapped up by EA to be director of product development at Victory Games in 2011. In 2014, he did a brief stint at Sony's Santa Monica Studio before joining Blizzard.

Campbell, meanwhile, holds the game director and president titles at Frost Giant. In his time, he has held designer roles at the likes of Westwood Studios, EA, Blizzard and FireForge. In 2018, he briefly worked at Otherside Entertainment as design director of System Shock 3, before moving to InXile as game director of Wasteland 3 in 2018.

"Real-time strategy players are an incredibly passionate community, and they deserve not just a great new game, but one they can share broadly with friends," Morten said.